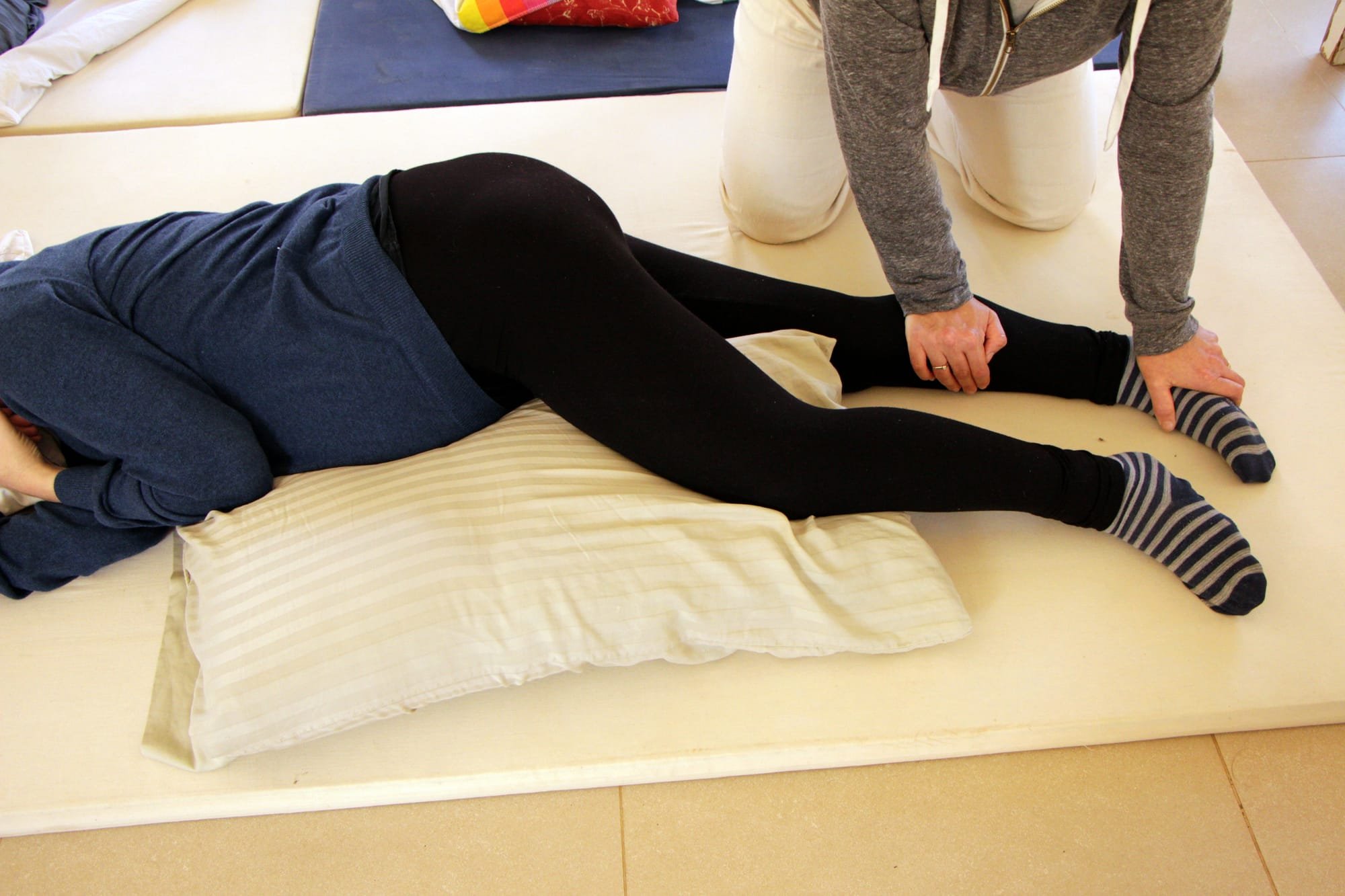 By Galit Shabiv
Orit came to me in the 32nd week of her pregnancy, after a long and discouraging round of searching for a solution.She suffered from three disc herniations - one cervical and two in the lower back that touches the scrum. Can't sleep at night, can't lie on her side, not on her back, prolonged sitting bothers her. Continuous and discouraging discomfort, in a woman who is used to moving quickly from place to place, doing sports, a full-time job and a master's degree at the same time.Oh, and first pregnancy. An important detail for understanding the full picture. In other words - twenty-seven-year-old Speedy Gonzalez who wants to devour life, give birth to children and what is this nonsense with the back.
I ask her to stand for a moment and watch. She is beautiful and well-groomed and made up and combed. Big eyes, which attract my attention. In general, the head attracts my attention. She talks with her hands, a lot of energy in the upper part, mainly in the head and chest. I mention it to myself.In the Shiatsu treatment using the Qi & Body method, I first work with kata. A thorough, deep, slow side kick. Each position (pressure point) is carefully chosen, in order to stimulate and remind the body, conscious or not, of the healing power that is present. which always exists, in any state of accumulation. He has many names, we call him Seiki.

The side cat is perfect for pregnancy. I lay her down with the neck at the height of the spine, neither higher nor lower than it, the scrum and the neck - the two ends of the stick - lie available on the same plane. The pelvis is exempt from carrying a large belly. The lower leg is completely straight, the upper one on a high pillow, which makes room for the stomach.

Kata is first of all rhythm. Confidence in the fact that the rhythm is constant, the entrance is not dramatic but very deep, because all the parts of my body that are in contact with her are supportive and attentive. She allows me and lets go. The side kata does thorough work on the Bladder, gently stimulates qi in the meridians through the association points, and mainly regulates the movement of qi by working on the side meridians - liver, gall bladder, TW.
The choice of points is not accidental. It is based on a practice based on a connection between the therapist's heart and consciousness - and the patient's qi and meridians, which respond to them through the tsubo.The kata frees me from thinking about the next move, the next point. Years of slow, rigorous, repetitive practice eventually resulted in the long-awaited feeling of freedom. I am truly free, and one channel, of my heart, is open to communication with the tsubo and is directed at all times to the deep healing power. Like an open radio station in the background.
I allow myself, during the movements, to think associatively: back. a support father. history. Memory. GV to trust. lean back I start groping gently. Sometimes it bursts out like a dam. Sometimes the masks are made of hard material, and I have to dissolve gently. give time
She was alone for many years. Now has a partner. Father died when she was 17. Used to support herself. to tick, to strive forward. That's where her energy is. In the head, in the chest, now also in the stomach. YANG YANG YANG. very determined Although she is dyslexic, she has a master's degree. Very successful at work.Tell me, I ask. What do you think of that back of yours?I have a shitty back, she says with painful precision. All my life he makes a mess of me.Since when do I ask and am not at all surprised by the answer. from military age.Do you trust your back to support your body?what to trustI stay there for a moment and ask her to talk about her back as a living being. Broken barrel rest. traitor. misleading. I don't trust him. It always falls apart when I need it.I think of a mother who loses her man and now has to raise children and what that does to her, to her shoulders, to the consciousness of survival that buys a strong grip on reality. And what does that do to a 17-year-old girl who loses her father and watches, learns from her mother what it's like to be a "backless" woman. What does it teach her to grow up to be.
I do not immediately verify information. There is a time and place for everything. Just like the gentleness we feel in a delivery room with a mother and midwife and a partner, here too there is a time to be transparent and a time to be present, even if I think I "know".
After two sides of the kata the body is already different. The deep work removes the unnecessary and allows the essence to thrust forward.The back is the past, memory, support, our ability to lean back. And also the yang part, which is related to the male and paternal essence.I believe that this thought, that she cannot trust the "back"/father, is a result of her life as a girl who experienced loss. And when we direct such a thought, lack of trust for example, to a part of our body - this is the opposite of nourishment. The organ is drained of energy, like an abandoned room in the house, because it no longer has a role and a place.

I think I understand why her back is breaking and asking her for so much attention. And she is still at 32 weeks. The belly is not small and it is not the end yet. The light must be turned on in this room, which has been dark for a long time. Turn it on now, because soon a mother will be born here.I'm going through a vertiginous period. On exhalation - the front part (chest, solar plexus, stomach, pelvis, hips) sinks into the back, and the back expands, the vertebrae relax and make room. That's it until the scrum. She goes into it determined to help herself. Listens to instructions and executes. I can literally feel the mass of the qi, if you can say that at all, leaving the front and sinking back.
When you do it slowly it takes something like twenty minutes. Almost all the time devoted to the specific treatment. I let go of the instruction and ask her to let it go and just pay attention to the feeling in her body. Then when she stands up she looks completely different. There is no longer a feeling as if she is "attacking me with excess yang".I feel a little like I'm going backwards, she says.

After three treatments Orit returned to functioning and sleeping without pain

After three treatments Orit returned to sleep and function without pain. The following treatments looked different and suited the time and place and feeling. The next treatment, for example, focused on specific conditions in the neck, upper back and arms.The idea was to stimulate Seiki in the upper part of the body and clear stagnation of chi that was in the neck and chest area. She received homework that she prepared with determination, with writing assignments and mindful breathing, and a refresher of thoughts about father and mother and herself as a mother.One can describe how wide and endless this discourse is. But mostly Orit learned to communicate with the part inside her that is meant to be supportive and upright and treasure memories - with her back.

Tsubo, the dynamic gateway to the depths
Qi of a therapist
Do nothing and everything will be done by itself